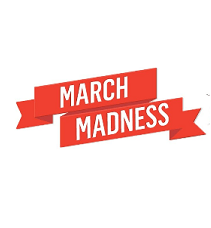 After months of cold weather, enthusiasm around the office is bound to slightly diminish. Grey skies, cold winds & snow on top of snow can really take a toll on anyone’s morale.
Luckily, March Madness games are upon us!
It’s a perfect distraction from the dull weather, and it gives basketball fans and non-fans alike something to have fun with.
What better way to boost your employee’s morale than a fun-filled opportunity to unwind after a full day of meetings. A fast-paced, highly interactive program where guests get to play and more importantly get to know each other in an environment of stimulating activity. Our games are accessible to non-athletes and athletes alike, so everyone has a chance to bond and to compete!

Choose a variety of games such as but not limited to, Wii/Kinect for X-Box/PlayStation, Speed Stacking, Electronic Golf, & Air Hockey. Bring your group together with our interactive team-oriented bracket tournament that promotes camaraderie, team development & healthy competition. Recruit your co-workers for a little half court action. Compete head to head and see who can score the most points in the allotted time!

We bring all of the double shot basketball equipment to you!

This is not your ordinary race game!
What are “Basketball Suicides”?
Suicides: “A drill running the length of the court. Repeatedly sprint from a starting point to each of a series of lines across the court, and back again. Touch the baseline, turn quickly and sprint to the free-throw line on the opposite side of the court. Touch the free-throw line, turn and sprint back to the baseline.” This exercise lives up to its name!
Dunkin Derby simulates this “drill.” At the signal, “GO,” Dribble the ball on the “court” (Electronic Sensor Pads)…your player will move along the court, the faster you dribble the faster your player will move. The first player to reach the end court wins the race, no “suicide!”
At the end of the race, the winning lane will light up, and the commentary will announce the color and the name of the winning player!

CHECK OUT OTHER POPULAR PROGRAMS!